All schools are now back in session. How about a shout-out to our valuable Educators worldwide who give themselves away everyday at work.

“Any fool can criticize, condemn, and complain but it takes character and self-control to be understanding and forgiving.” –Dale Carnegie Thousands of projects are planned each year involving corporations, communities, nonprofit organizations, entire states and individuals. Many of the 250 HandsOn Network affiliates lead projects across the nation.

The stories told around Make A Difference Day show that anyone – regardless of age, location or resources – can accomplish amazing things when they take on the problems they see in their community. Recognizing the power of Make A Difference Day, other organizations join with USA WEEKEND and Points of Light each year to inspire and recognize the valuable work of volunteers. Newman’s Own supports the day by awarding $10,000 to the charities of each of 10 National Honorees and three City Awardees. USA WEEKEND Magazine will feature the All-Star honoree, 10 National and three City Award honorees in a special April 2014 issue coinciding with National Volunteer Week, led by Points of Light.

We invite you to join us in service on Make A Difference Day 2013.

Read our Get Started or read our FAQ to learn more.

ALSO: If you aren’t going to be a part of a programmed group project, grab some family or friends and create your own small project on the fly. Or how about a meet-up project. And of course, little ole’ you can just make your own little difference, because don’t forget, to the recipient, your little difference might just be a really big difference.

All people of the world are invited to participate. It makes no difference where you are from or where you live. Making a difference for someone else is part of the international process called LOVE.

“The sweetest joy, the wildest woe is  Love. What the world really needs is  more Love and less paperwork.”  —Pearl Bailey

I just love stories like this. What a wonderful testament to Desaray’s town, school, and especially, her classmates. And, to Desaray for being a beautiful GYA young woman.

In many ways, Desaray Carroll is a typical high school teenager. She texts nonstop, hangs out with her friends, goes to the movies and out to eat.

The 19-year-old Coahulla Creek High School student is surrounded with a family and friends who love and support her, so much so they campaigned for the student body to elect her prom queen a few weeks ago. Everyone except Carroll seemed sure she would win. But after a lifetime of being picked on for being different, she never thought she could be the same as those around her.

“At my old school, I got made fun of,” she said. “I didn’t want to go to school. It was really hard. At one point I quit school, but I came back.” Carroll has cerebral palsy, a disorder that affects muscle tone, movement and posture. People with cerebral palsy can have exaggerated movements, rigidity of the limbs, involuntary movements, unsteadiness while walking or any combination of those symptoms. She struggles with her speech – though after a few minutes with her, she becomes easier to understand – and movements on the right side of her body.

When her name was called out on prom night announcing she had been named prom queen, Carroll was naturally and genuinely shocked. “I didn’t believe it,” she said. “I really like it here. They don’t look at me like I have cerebral palsy.” Carroll’s friends and her teachers said they believe it is a great testimony to the student body at Coahulla Creek. “Their heart is in the right place,” said Josh Swiney, Carroll’s math inclusion teacher. “They’ve been around her and wanted that for her. She’s awesome.”

…Even if Carroll is having a terrible day, she is sweet and kind to everyone. “I never hear her say anything mean about anyone,” McCraw said. “You can never tell if she’s having a bad day.” Carroll may struggle with some everyday tasks, but she possesses many traits her friends don’t. “She’s able to do stuff we’re not able to,” Torres said. “She stays strong. She has people here that love her and support her.”

Information from: The Daily Citizen, http://www.daltondailycitizen.com 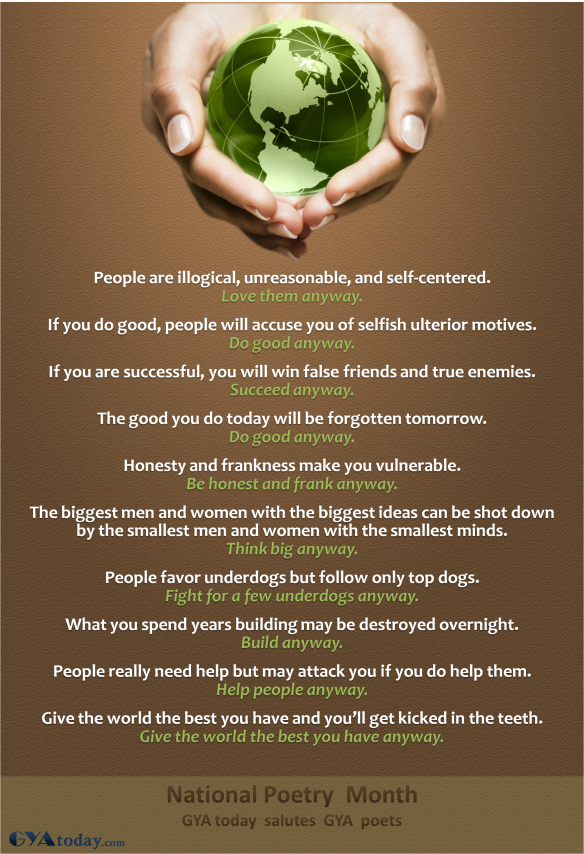 People are illogical, unreasonable, and self-centered.
Love them anyway.
If you do good, people will accuse you of selfish ulterior motives.
Do good anyway.
If you are successful, you will win false friends and true enemies.
Succeed anyway.
The good you do today will be forgotten tomorrow.
Do good anyway.
Honesty and frankness make you vulnerable.
Be honest and frank anyway.
The biggest men and women with the biggest ideas can be shot down by the smallest men and women with the smallest minds.
Think big anyway.
People favor underdogs but follow only top dogs.
Fight for a few underdogs anyway.
What you spend years building may be destroyed overnight.
Build anyway.
People really need help but may attack you if you do help them.
Help people anyway.
Give the world the best you have and you’ll get kicked in the teeth.
Give the world the best you have anyway.

Where Our Readers Live: